Two independent studies (Southworth et al., 2009 and Kroll et al., 2011) were designed to gather the pivotal/registration analgesic data required for pain indication with US FDA, and an additional pre-emptive analgesic study was completed to complement the two pivotal studies.

The analgesic effects of a range of doses of intravenous ibuprofen were studied in a multicentre placebo-controlled trial in adult patients in the post-operative setting. Three large, randomized, double-blind, placebo controlled, multicentre trials evaluated the therapeutic efficacy of intravenous ibuprofen as adjunctive therapy to morphine for the treatment of postoperative pain in adult patients who underwent elective orthopaedic and/or abdominal surgery. All patients in these trials received morphine plus adjunctive ibuprofen or placebo. Key trial design details are summarized below. Within each trial, there were no significant differences between treatment groups in terms of baseline demographic and clinical characteristics. Patients were stratified by age and weight, since the morphine dose is known to directly correlate with these two parameters.

Southword et al 2009 study is a multicenter, randomized, double-blind, placebo-controlled trial. It is conducted with 406 patients. Compared with placebo:

In this study, ibuprofen 800 mg i.v. q6h was associated with significant reductions in morphine use and pain at rest and with movement compared with placebo. Ibuprofen i.v. was not associated with significant increases in AEs compared with placebo, with the exception of dizziness with the 800 mg dose. These findings suggest that ibuprofen 800 mg i.v. q6h was effective for postoperative pain management and was generally well tolerated.

The 400 mg dose trended towards reduced morphine requirements and decreased VAS scores but did not reach statistical significance.

The potential benefits of pre-operative dosing of intravenous ibuprofen for post-operative analgesia were assessed in a multicentre placebo-controlled study (Singla et al., 2010) in adults undergoing orthopaedic surgery. In this pain and morphine-sparing study, 185 adult patients set to undergo orthopaedic surgery were randomized to 800 mg intravenous ibuprofen or placebo, via 30-minute infusion administered prior to surgery and every 6 hours thereafter.

Singla et al 2010 study is a multi-center, randomized, double-blind placebo-controlled trial. It is conducted with 185 patients. Compared with placebo:

This prospective randomized placebo-controlled trial demonstrated that, pre- and post-operative administration of i.v. ibuprofen significantly reduced both pain and morphine use in orthopaedic surgery patients.

The analgesic effects of intravenous ibuprofen were then confirmed in a multicentre placebo-controlled trial (Kroll et al., 2011) in adult women undergoing elective abdominal hysterectomy. In this study, 319 women who had undergone elective abdominal hysterectomy surgery were randomized to 800 mg intravenous ibuprofen or placebo, via a 30-minute infusion administered every 6 hours.

Kroll et al 2011 study is a multicenter, randomized, double-blind, placebo-controlled trial. It is conducted with 319 patients. Compared with placebo:

This study demonstrated that i.v.-ibuprofen is an effective analgesic medication that is safe and well tolerated when administered as an 800 mg dose every 6 hours in patients undergoing total abdominal hysterectomy surgery.

These data further confirm the analgesic efficacy of intravenous ibuprofen and provide evidence of the possible added benefits of pre-emptive administration in a multimodal analgesia surgical setting.

Analgesic efficacy endpoints were rated by the patient using a visual analogue scale (VAS; scale of 0–10 (Kroll et al) or 0–100 (Singla et al ve Southworth et al.) ; 0 = no pain and 10 or 100 [whichever was the upper limit of the scale]= worst possible pain) and, in one trial (Singla et al), a verbal rating scale (VRS; 0 = no pain and 4 = severe pain). To determine the differences in overall pain at different timepoints, the area under the VAS pain curve (AUCVAS) at rest and with movement was analysed for the following time periods: 1–24 hours (Southworth et al and Kroll et al) , 6–24 hours and 12–24 hours, or 6–28 hours (Singla et al).

In the two trials (Southworth et al and Kroll et al) in which morphine consumption in the first 24 hours was the primary endpoint, transformation analyses indicated that adjunctive ibuprofen 800 mg, but not ibuprofen 400 mg, resulted in a significantly lower consumption of morphine by postoperative patients in mITT analyses. These transformation (log rank or Box-Cox) analyses were conducted because ANCOVA model assumptions of homogeneity of variance were violated. 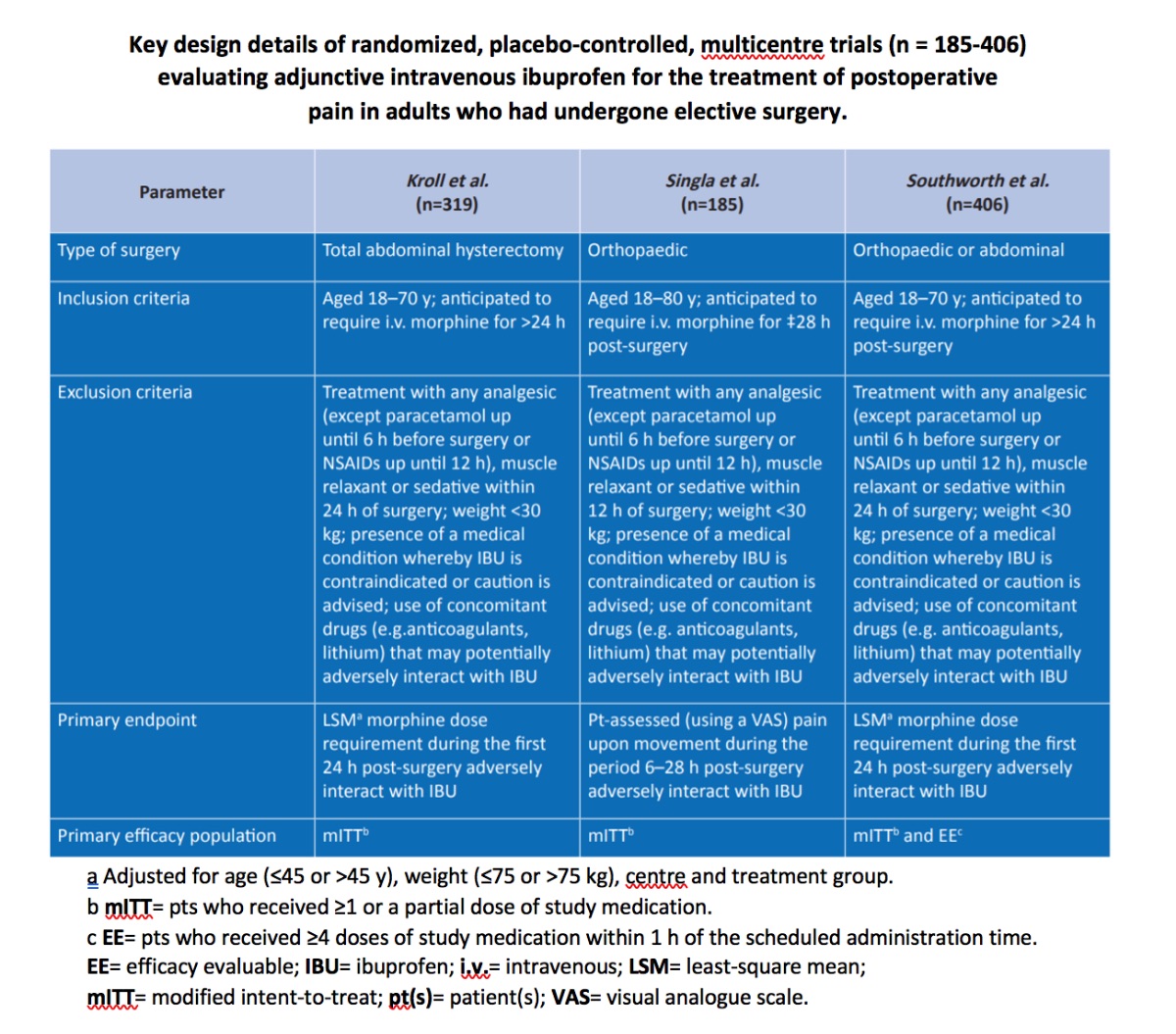 Similar trends for a reduction in postoperative morphine consumption with adjunctive ibuprofen 800 mg every 6 hours were observed (Southworth et al) in the efficacy evaluable (EE) population (coprimary efficacy population in this trial; The least-square mean (LSM) values for morphine consumption over the first 24 hours in the adjunctive ibuprofen 400 mg (n=111), ibuprofen 800 mg (n=116) and placebo (n=115) groups were 44.7, 42.1 and 48.8 mg, respectively (primary endpoint), as assessed by ANCOVA. After log-rank transformation of data, respective LSM values for morphine consumption were 168.3, 154.5 (p = 0.026 vs placebo group) and 184.4 mg. 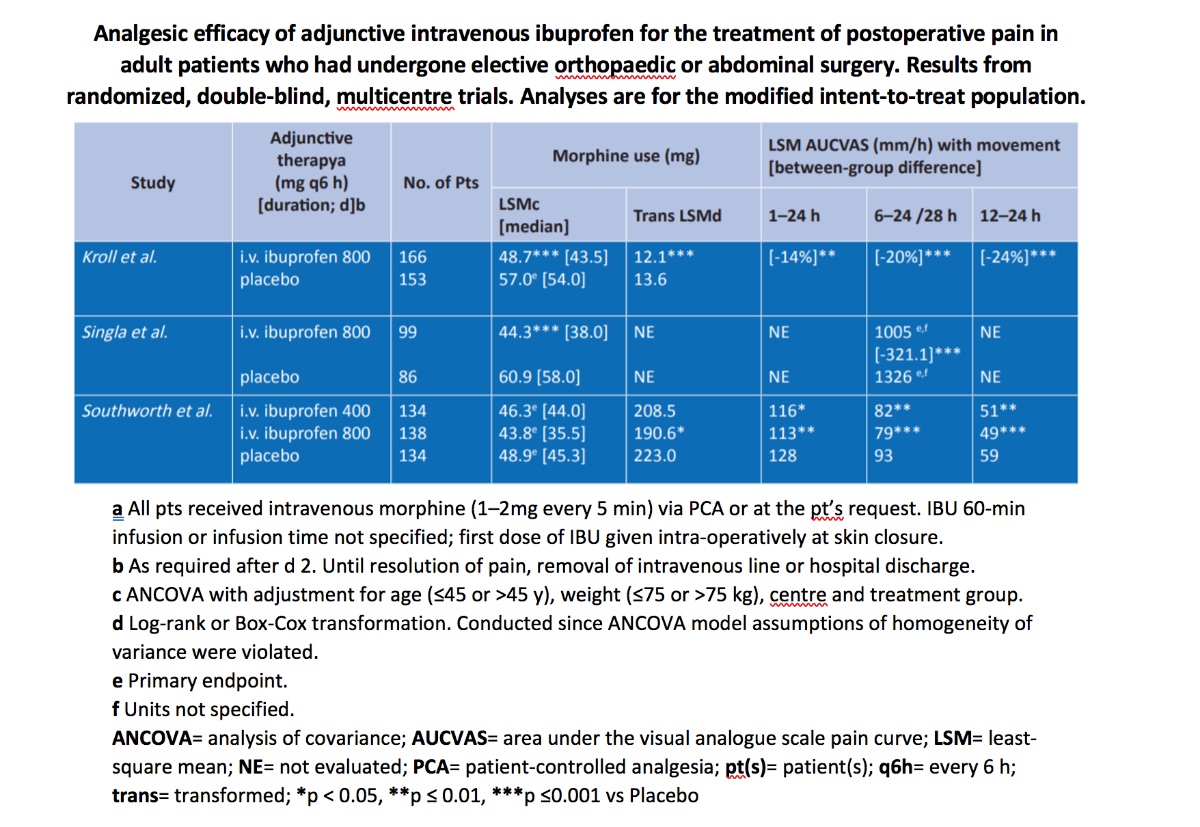 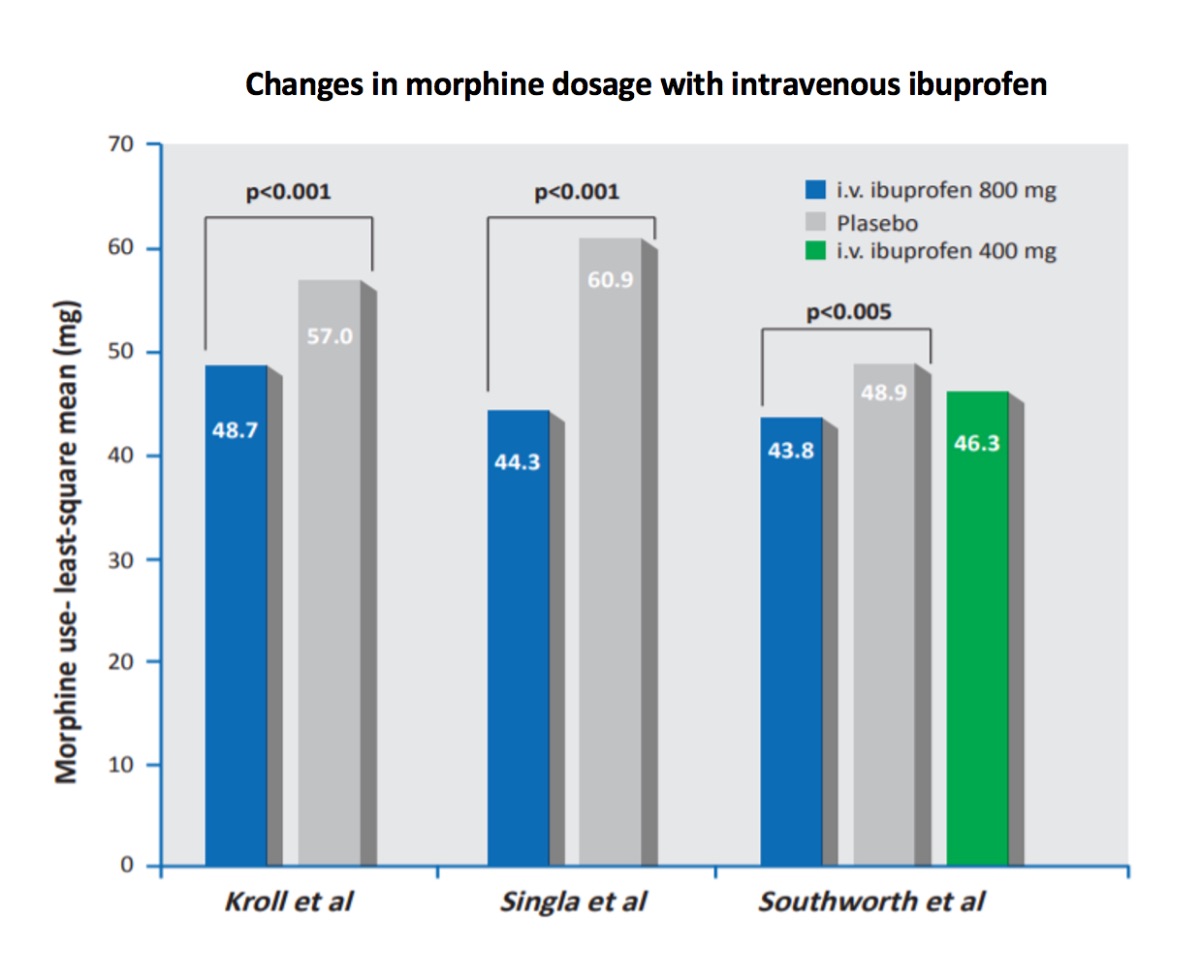 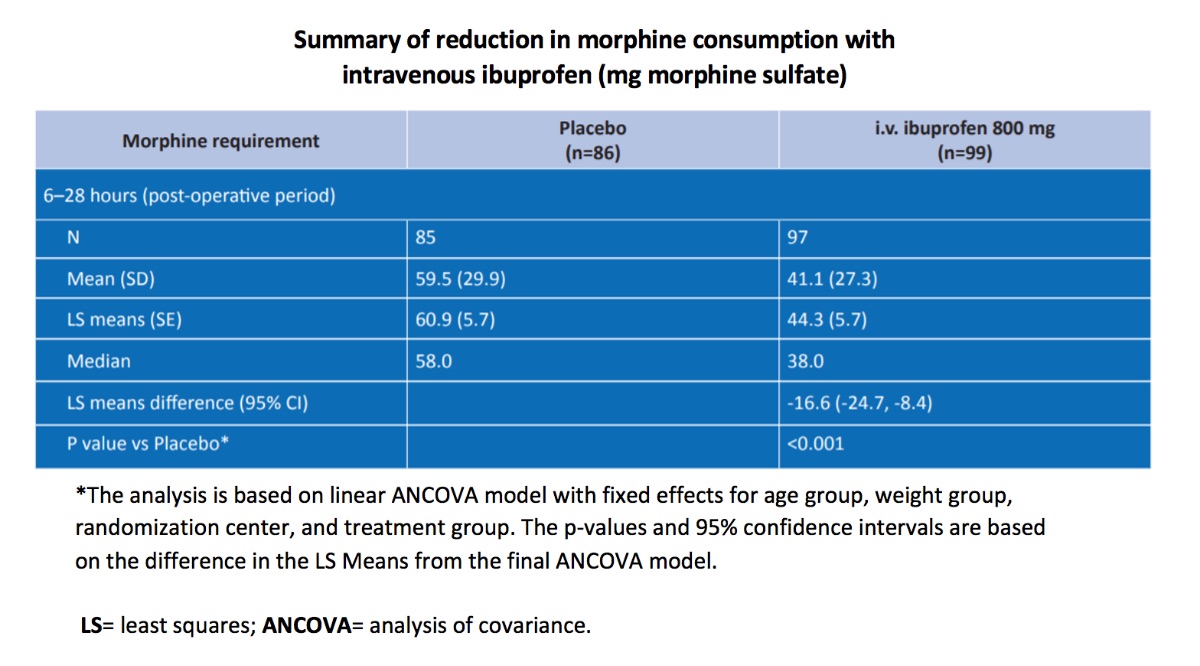 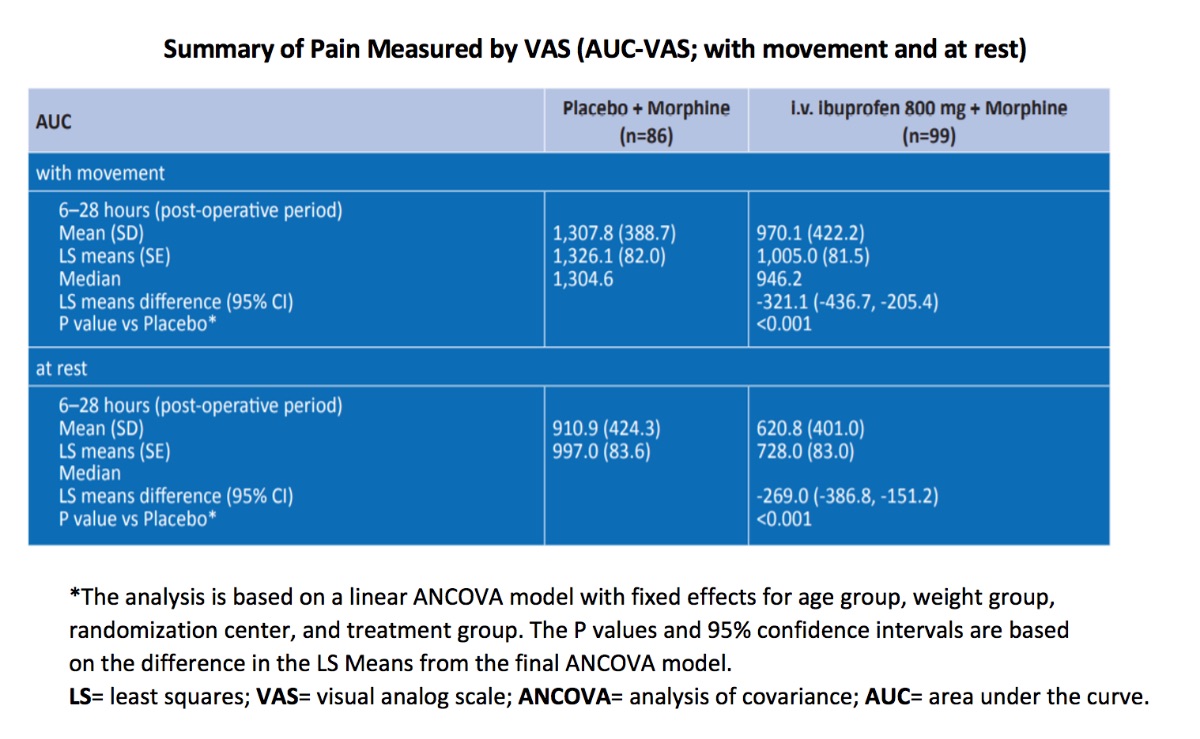 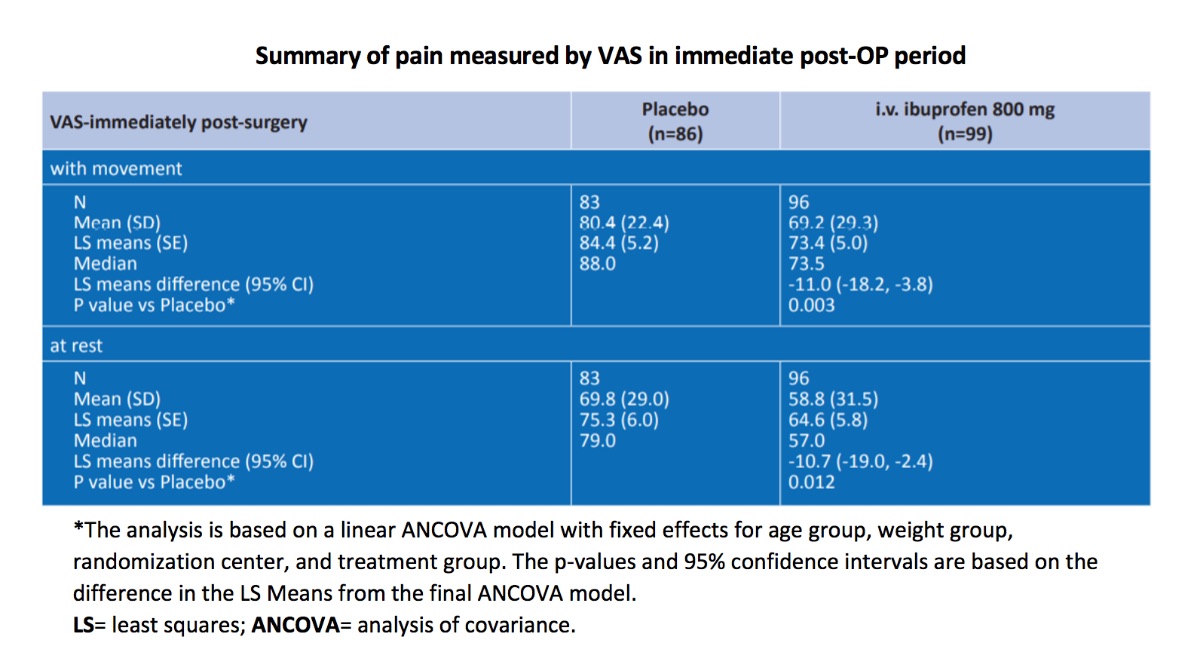 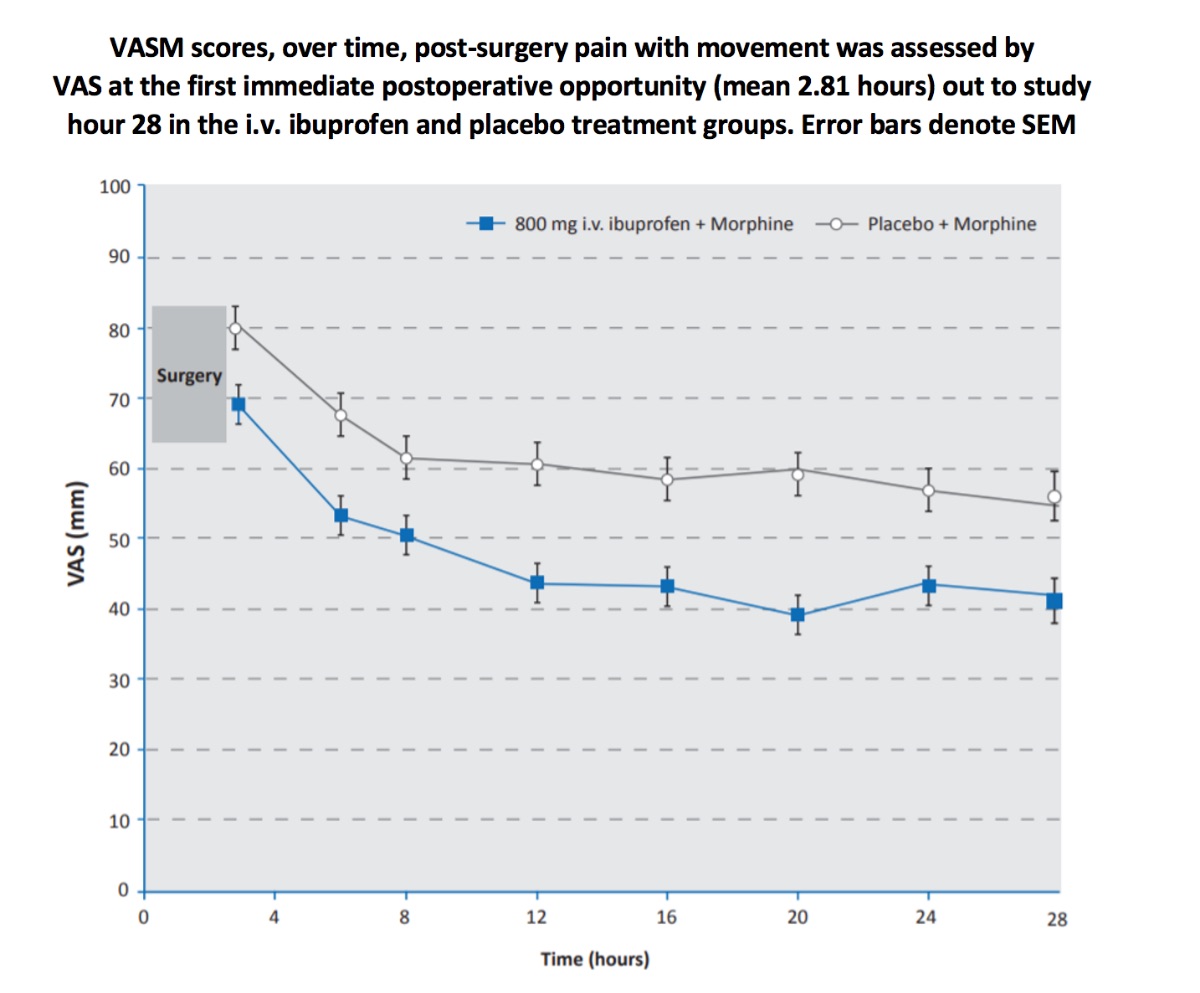 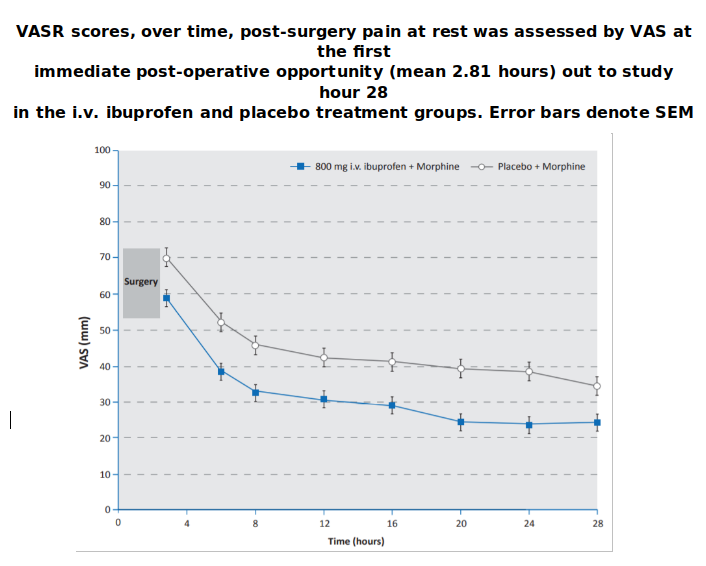 Key design details are summarized below. Within each trial, there were no significant differences between treatment groups in terms of baseline demographic and clinical characteristics. In one of these trials, the dosage utilized was higher than that which is recommended for the treatment of fever.

Taken together, these studies demonstrate the antipyretic efficacy of a 30-minute infusion of intravenous ibuprofen in adult patients.

The first of the fever trials (Morris et al), was a multicentre, placebo-controlled, dose-ranging trial in hospitalized adult patients with fever due to varying underlying illnesses of a range of severity. In this study, 120 patients who had temperatures of 38.3°C or greater* were randomized to receive i.v. ibuprofen 100 mg, 200 mg, 400 mg or placebo, via 30-minute infusions administered every 4 hours for 24 hours of treatment. All i.v. ibuprofen dose levels resulted in a statistically significant (p < 0.05) reduction in the number of patients with a temperature less than 38.3°C after 4 hours, compared with placebo. [*A temperature difference of 1°F is the equivalent of a temperature difference 0.556°C]

In this study (Morris et al) the difference in the mean temperature decrease from baseline was 0.6-0.8 °C (95% CI -4.39, 7.13) for the i.v. ibuprofen -treated patients, compared with placebo. Although this study was not designed to show statistically significant differences between i.v. ibuprofen dose levels, a clear dose response trend was observed, with the 400 mg dose having the greatest response. The first temperature measurement occurred 30 minutes following the completion of the 30-minute infusion of intravenous ibuprofen and revealed a significant temperature reduction, demonstrating a maximum 30-minute time of onset of the antipyretic effect of intravenous ibuprofen.

This study demonstrated that; i.v. ibuprofen appears to be safe and effective for the short-term treatment of fever in hospitalized patients unable to tolerate oral medications.

The second fever trial (Krudsood et al) was a single-centre placebo-controlled study in hospitalized malaria patients. In this study, 60 patients with uncomplicated Plasmodium falciparum malaria with temperatures ≥38°C were randomized to receive 400 mg of intravenous ibuprofen or placebo, via 30-minute infusions administered every 6 hours for 72 hours of treatment. There was a statistically significant reduction in the area under the curve for temperature above 38°C versus time (AUC-T°), as AUC-T° for intravenous ibuprofen compared with placebo measured over 0–4 hours, 0–24 hours and 0–72 hours were all significantly lower (p < 0.05)

In ITT populations, intravenous ibuprofen treatment provided effective antipyretic efficacy in hospitalized, febrile adult patients with burns, those who were critically or non-critically ill and patients with acute uncomplicated malaria.

Krudsood et al 2010 study is a doubleblind, placebo-controlled trial. It was conducted with 60 patients. Compared with placebo:

This study demonstrated that, i.v. ibuprofen is an effective and well tolerated antipyretic agent in adults hospitalized with uncomplicated falciparum malaria. 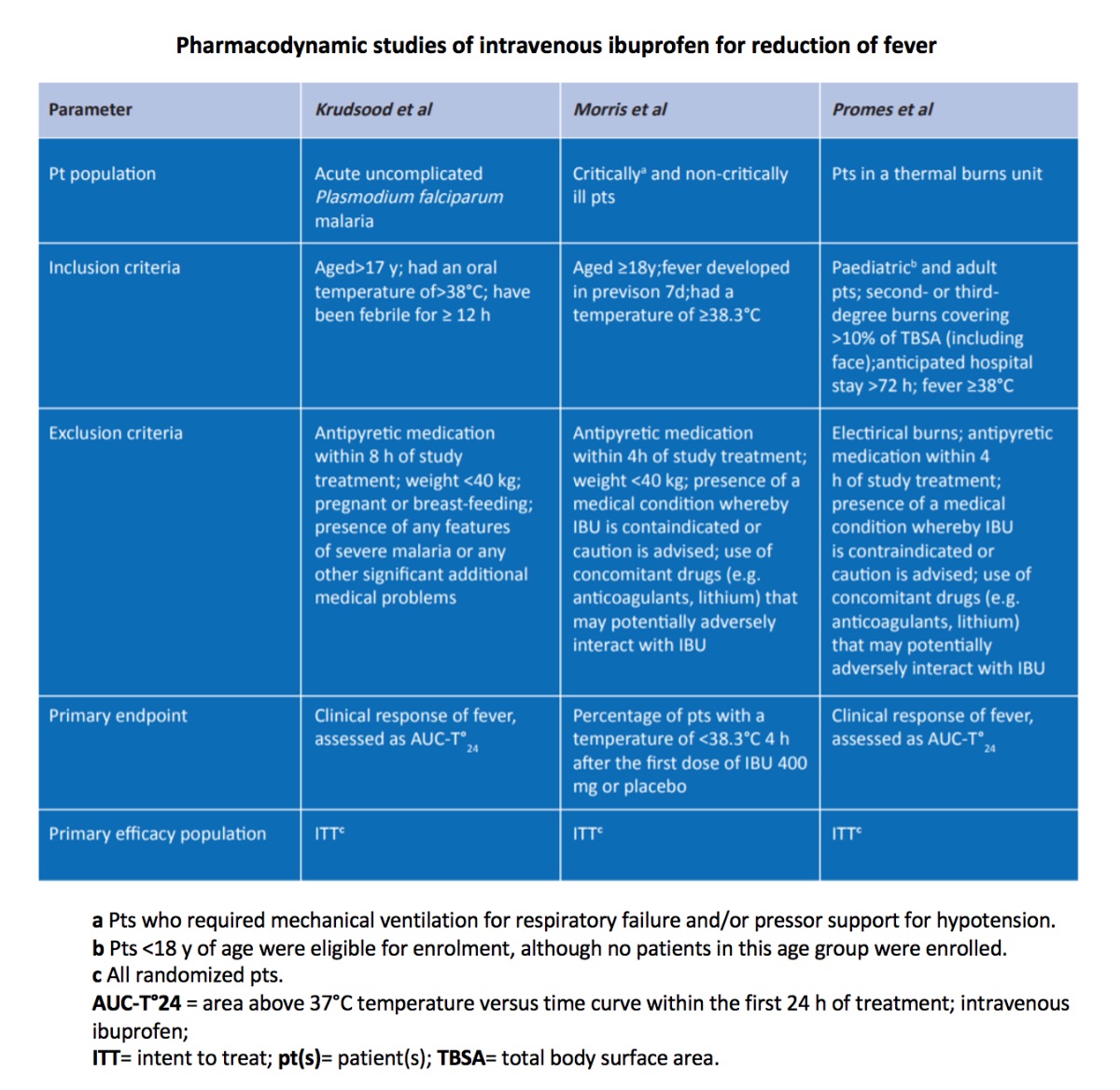 While the first two fever trials focused on patients with infectious diseases, the third fever trial (Promes et al) was a multicentre placebo-controlled study in hospitalized burn patients. In this multicentre placebo-controlled study, 61 patients with second- and/or third-degree thermal burns covering >10% total body surface area were randomly assigned in a 2:1 ratio to receive either 800 mg intravenous ibuprofen or placebo, via 30-minute infusions administered every 6 hours for 120 hours.

There were significantly greater reductions in the area above 370 C temperature versus time curve (AUC-T0) within the first 24 hours of treatment (AUC-T0 24) in ibuprofen groups than in placebo groups (table 12; primary endpoint in two trials). The percentage of patients with a temperature of < 38.3⁰C 4 hours after the first dose was also significantly lower in all ibuprofen groups (100–400mg) than in the placebo group (primary endpoint for intravenous ibuprofen 400 mg dose). 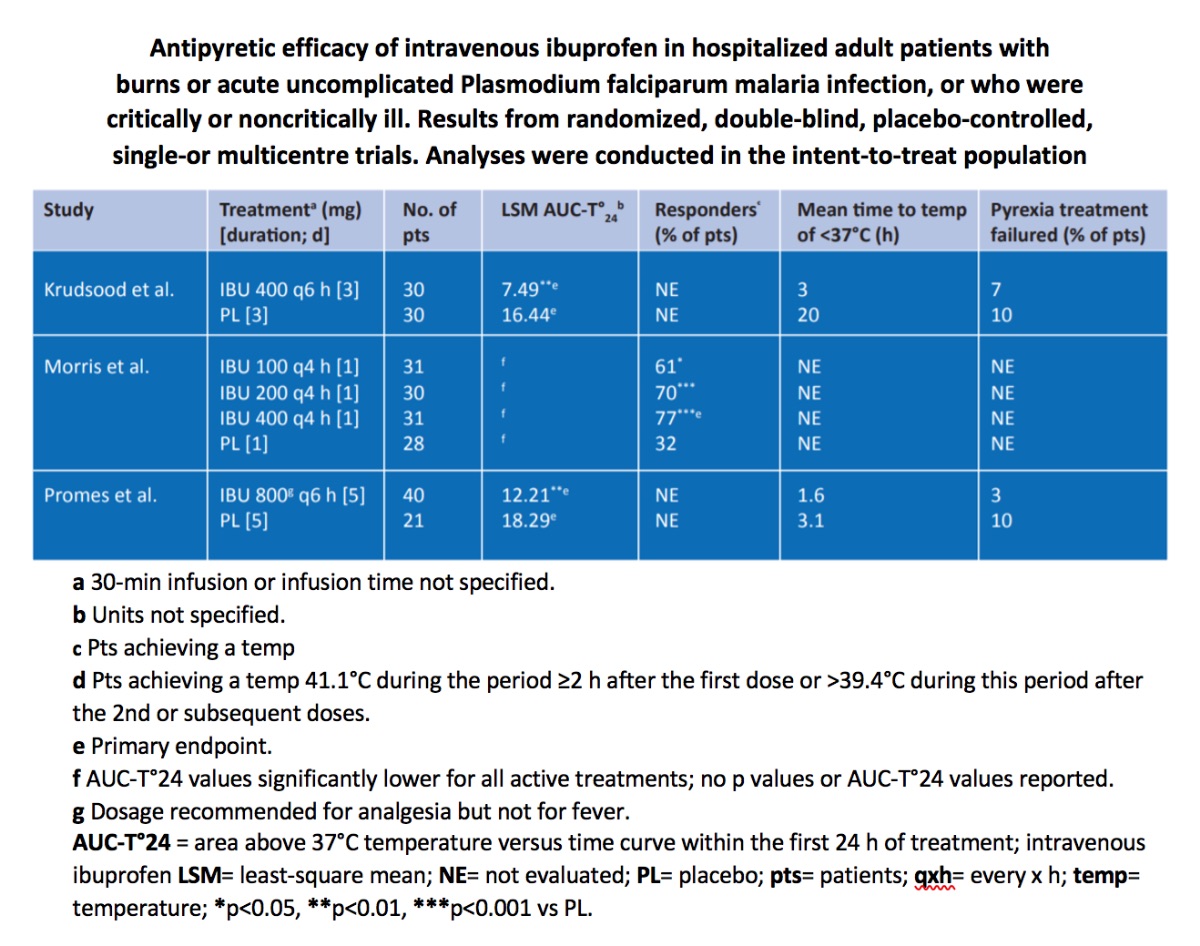 Furthermore, relative to placebo, reductions in fever in hospitalized febrile patients receiving intravenous ibuprofen occurred irrespective of whether they were defined as critically ill (n=53 of 120 enrolled patients; 44%) or non-critically ill (n=67; 56%) at baseline.

In other secondary analyses in the ITT population, there were no significant between-group differences in the mean time to treatment failure or the mean temperature decrease at 24 hours in this study.

Reductions in LSM AUC-T0 values in febrile patients with burns receiving intravenous ibuprofen 800 mg every 6 hours were sustained for the entire 120-hour treatment period (LSMAUC0 T120 48.4 vs 55.8 in the placebo group; units not specified). Apart from during the first 24 hours, there was no significant between-group difference in LSM AUC-T0 values.

In febrile patients with acute uncomplicated malaria, reductions in the mean AUC-To for the first 4 hours (2.4 vs 5.18; p< 0.0001; no units specified) and for the entire 72-hour (8.85 vs 16.94; p=0.02) treatment period were also significantly greater with ibuprofen 400 mg every 6 hours than with placebo. There was no between-group difference in mean AUC-T0 values for the period from 24 to 72 hours. 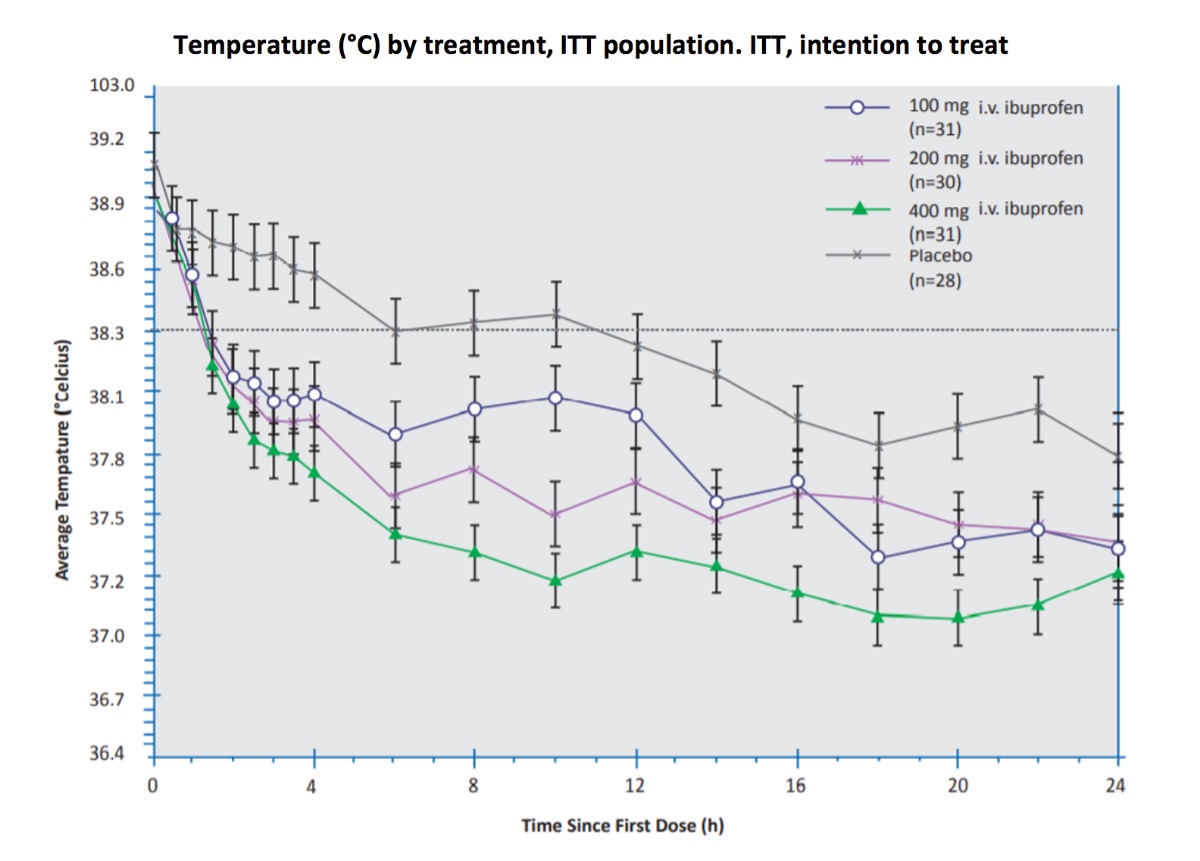 Each of the three intravenous ibuprofen doses (Morris et al), 100 mg, 200 mg, and 400 mg, resulted in a statistically greater percentage of patients with a reduced temperature ( < 38.30C) after 4 hours, compared to placebo (61%, 70%, 77% and 32%, respectively). Temperature decreased in both the critically ill and non-critically ill subjects receiving intravenous ibuprofen versus those receiving placebo. However, this study was not designed to show differences in efficacy between treatment doses. This study may demonstrate that higher doses, such as 800 mg are required for fever reduction in critically ill patients.

100 mg, 200 mg, and 400 mg intravenous ibuprofen doses resulted in a statistically greater percentage of patients with a reduced temperature ( < 38.3) after 4 hours, compared to placebo. 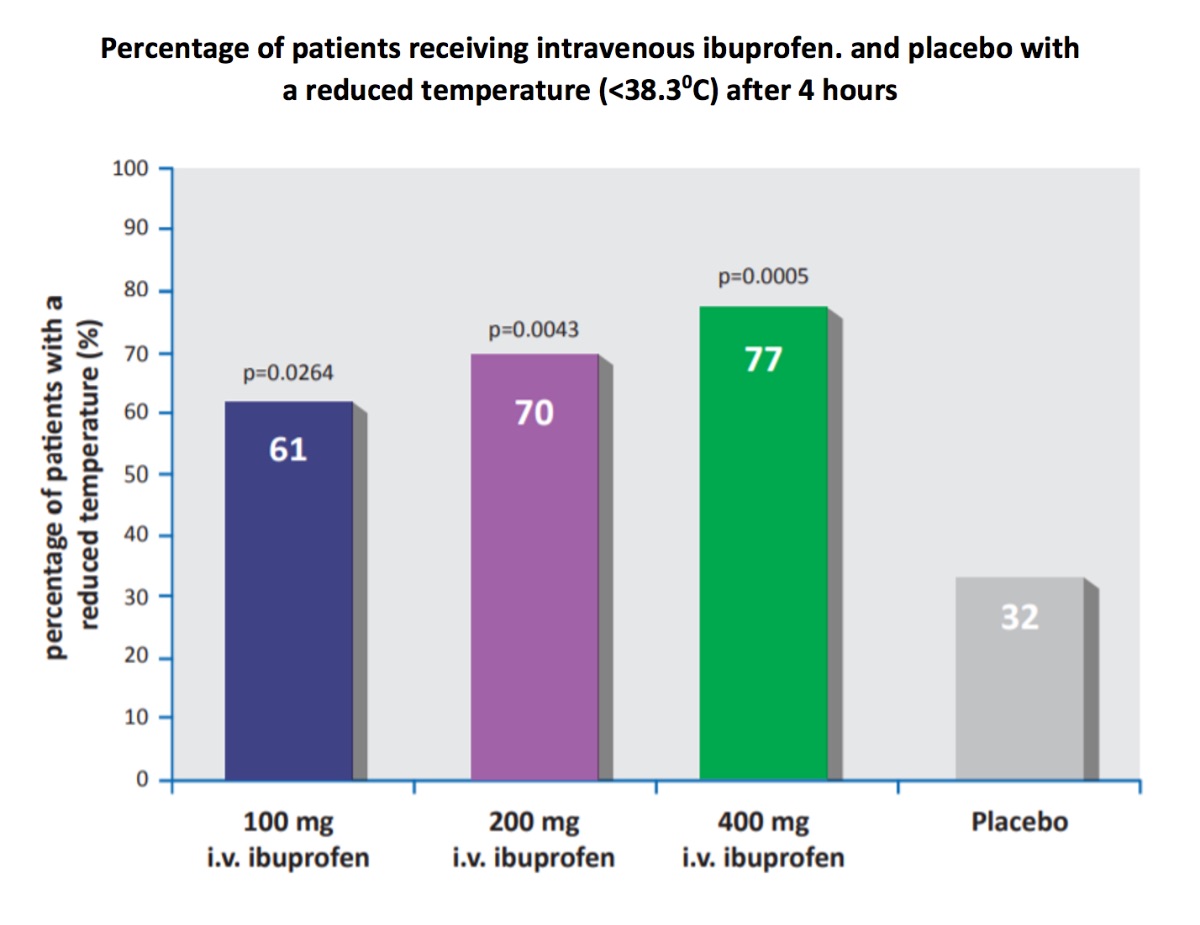 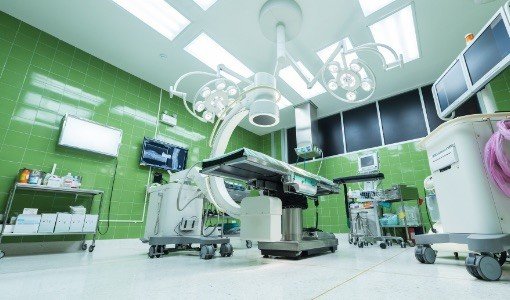